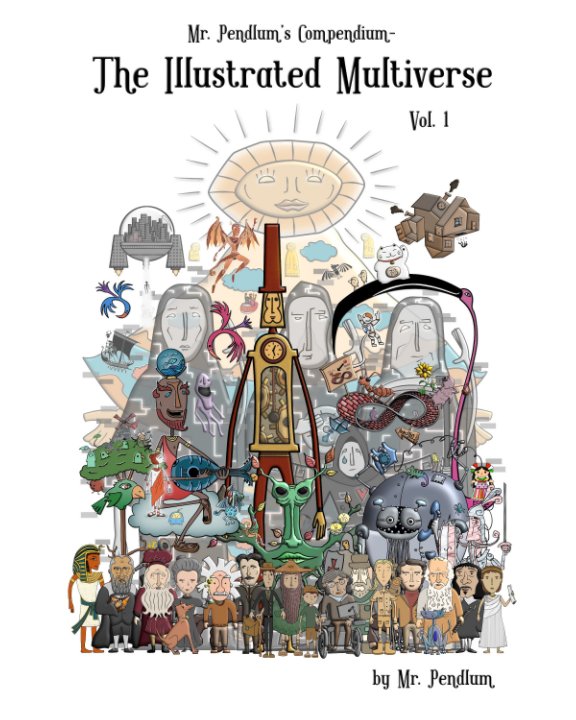 If Carl Sagan and Dr. Seuss had written a book together, it may have resulted in something like Mr. Pendlum's Compendium-Illustrated Verse from the Multiverse Vol. 1.

This book is a bridge between fact and magic, knowledge and wonder, a bridge that is needed now more than ever. It presents amazingly complex and varied topics, such as quantum physics, the Doppler effect, cymatics, and many others, transformed into fantastical rhymes and poems that children, just as much as adults, can engage with and enjoy. It presents characters and concepts from different cultures, mythologies, literary works and other sources and from a wide variety of fields, such as astrophysics, philosophy, psychology, history, and many others.

It also contains biographical poems of many fascinating figures, such as Marie Curie, Jane Goodall, Pablo Picasso, René Descartes, and Galileo Galilei, presenting their stories in a way never seen before. At the same time, this book communicates important values and instills a sense of social, environmental, and moral responsibility through its masterfully crafted verses. And, of course, it's mixed with a healthy dose of quirky fictional elements and characters from the Syneverse.

Each poem is accompanied by a charming illustration that contains several hidden pictures, or “easter eggs”, for you to find! And it doesn’t end there—the Pendlum Addendum near the end of the book contains links to songs, music videos, and audiovisual poems that have been narrated, musicalized and animated, all inspired by the poems in the book. These and other interactive and immersive resources found in the book will add a new dimension to your reading experience.

This book is guaranteed to inspire your sense of wonder, feed your curiosity, and quench your love of learning. Mr. Pendlum's Compendium has all of the elements of a timeless classic, destined to be found on a shelf next to the works of Silverstein, Sendak, Seuss, and Mother Goose!