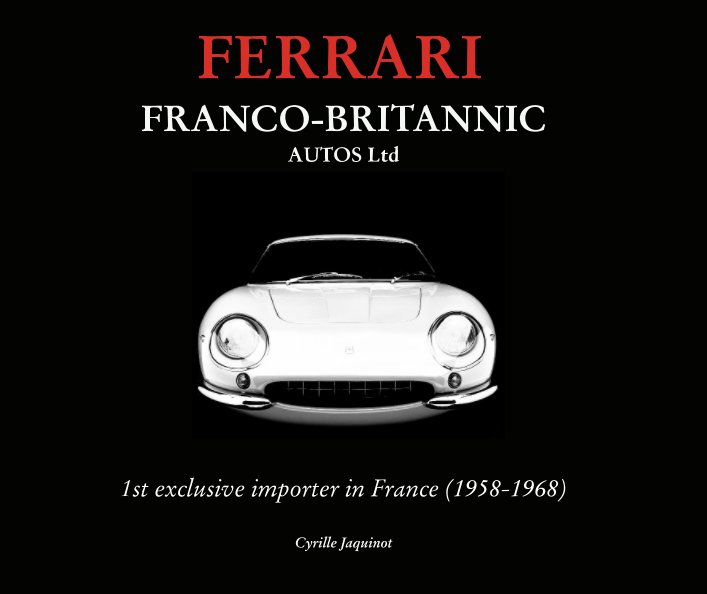 English version of the original book published in 2018.
This book, on a theme never addressed before, is a tribute to the Sleator family, Franco-British family, as well as to all the collaborators, partners, friends and customers of Franco-Britannic Autos Ltd who, during these ten The years of importation from 1958 to 1968 helped promote the extraordinary image of Ferrari in France.
Franco-Britannic Autos Ltd, thanks to Walter then with his son Donald Sleator, imported the most beautiful automobiles in the world on French soil from 1933 to 1989 for their most demanding customers. Exclusive importer since 1933 in Paris of the two prestigious English brands Rolls-Royce and Bentley, then Rover importer (and Land Rover), Franco-Britannic Autos Ltd from autumn 1958 became the very first Ferrari exclusive importer in France. The FBA Ltd has known this new generation of buyers, the "New Wave" as sung in one of its songs by a certain Richard Anthony, young film actors, writers, and other artists, businessmen, industrialists, all needed and wanted to stand out by associating their image with that of exceptional cars and more particularly Ferrari.
Celebrities such as Jean-Paul Belmondo, Yves Montand, Françoise Sagan, Roger Vadim, Johnny Hallyday, Alain Delon, Claude François and many other stars were at one time clients of Franco-Britannic Autos Ltd. An art of owning a road Ferrari, a very dynamic image, is considered a symbol of professional and social success.
The first Ferrari advertisements in France by the FBA Ltd, our French stars of the “yé-yé” era, all the Paris Motor Shows, all the Ferrari of the race management during the 24 Hours of Le Mans, piloted by Donald Sleator, then official pilot until 1967. Tribute to Pierre Noblet, Sylvain Garant etc.
Author website
http://www.cavallinomarket.com