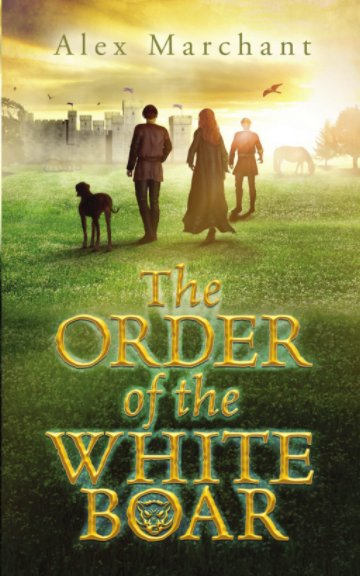 The Order of the White Boar

How well do you know the story of King Richard III? Not as well as Matthew Wansford.
Matthew, a 12-year-old merchant’s son, has always longed to be a knight. And his chance comes in the golden summer of 1482 when he arrives at Middleham Castle, home of King Edward IV’s brother, Richard, Duke of Gloucester – valiant warrior, loyal brother, loving father, good master.
Soon Matt encounters a dangerous enemy. Hugh, a fellow page, is a better swordsman, horseman, more skilled in all the knightly arts – and the son of an executed traitor. A vicious bully, he aims to make Matt's life hell.
Yet Matt also finds the most steadfast of friends – Alys, Roger and Edward, the Duke’s only son. Together they forge a secret knightly fellowship, the Order of the White Boar, and swear an oath of lifelong loyalty – to each other and to their good lord, Duke Richard.
But these are not times to play at war. Soon Matt and his friends will be plunged into the deadly games of the Wars of the Roses. Will their loyalty be tested as the storm looms on the horizon?
For readers of 10 and above, ‘The Order of the White Boar’ tells the exciting adventures of Matt and his friends in the months leading up to the momentous events of 1483, the ‘Year of the Three Kings’.
And coming soon, in early 2018, ‘The King’s Man’, following Matt’s further adventures as he serves the new King Richard III through to the fateful summer of 1485 and beyond.

A Ricardian since a teenager, and following stints as an archaeologist and in publishing, Alex now lives and works in King Richard’s own country, not far from his beloved York and Middleham. 'The Order of the White Boar' and 'The King's Man' are Alex's first novels for children and together they tell the story of the final three years in the life of King Richard III through the eyes of Matthew Wansford, a young page in his service. Starting at Middleham Castle in Yorkshire in the summer of 1482, they follow Matt and Richard through the Year of the Three Kings to the fateful days of August 1485 - and beyond...