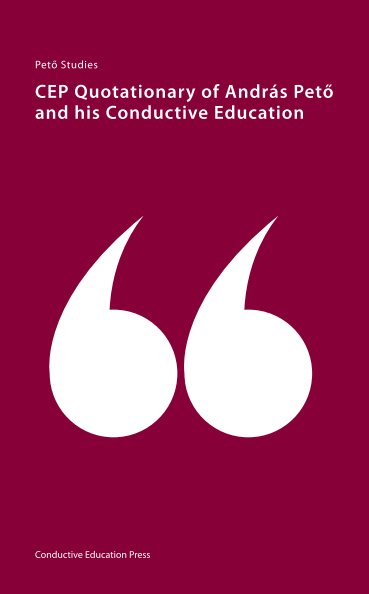 One was the practice of conductive pedagogy, variously konduktív nevelés, Conductive Education, konduktive Förderung – an uncrystalised Chinese whisper that has since mutated down generations and across societies. Some such practices may have much in common with András Pető's and his associates', some very little – all are concrete activities, practised, or experienced, observed and analysed. They are what you see.

The other is the heritage of recollections of András Pető himself, what he did, how he was, and perhaps what drove him. Who was this Will-o'-the-Wisp, András Pető, what words of his echo down to us? How did people at the time understand that mystery in their midst? This second inheritance is far harder to find, to separate from myth and fantasy in what you hear and what you read.

This quotationary's 307 quotations contribute some distilled essence, including 48 sayings or reported sayings from the man himself, plus vivid direct reports from friends and associates, and the observations of some of those who have tried to nail his fleeting shadow.

These quotations come from 40 named sources, and are referenced to 15 different texts.

Originals were in German, Hungarian and English, all are presented here in English translation.