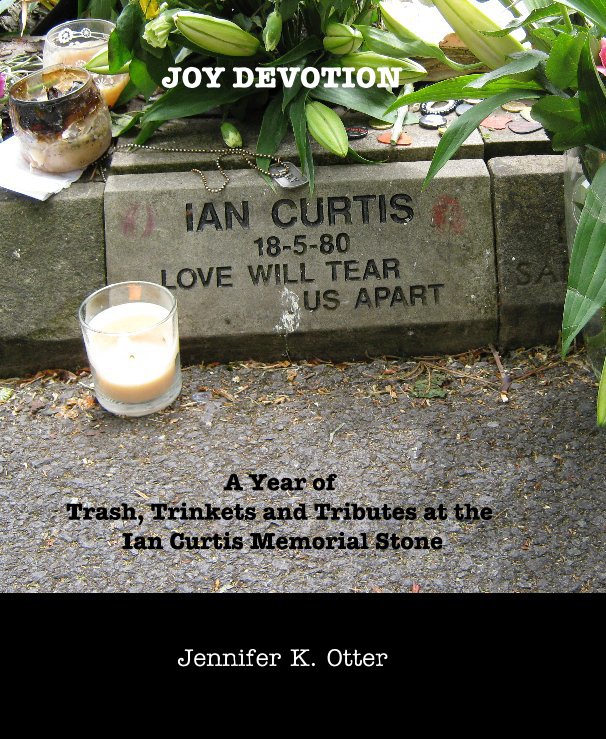 A Year of Trash, Trinkets and Tributes at the Ian Curtis Memorial Stone

Located just over 15 miles outside of the English hub of Manchester, Macclesfield was the home of the late singer and lyricist Ian Curtis, front man for post-punk pioneers Joy Division. The ashes of Curtis are now buried minutes away from where he lived, at the Macclesfield Cemetery and Crematorium.

Though it has been over 30 years since he took his life, an estimated 2,000 people annually make their way to the small, quaint Northern town, on a quest to pay homage to Curtis. Traveling from as far-flung destinations as Japan, Texas and Australia, fans embark on sonic pilgrimages to walk the streets that inspired Curtis, see the house where he once inhabited- and pay their respects at Curtis’s Memorial Stone.

As a part of her PhD research, photographer Jennifer Otter captured images of the fans, flowers and fauna every month over the course of a year at the Curtis 'kerb.' Joy Devotion: A Year of Trash, Trinkets and Tributes at the Ian Curtis Memorial Stone documents the ever-changing homages to the singer and provides unique insight into music, community and memory.

+ A year of pictures documenting the trash, trinkets, and tributes left at the Ian Curtis Memorial Stone, including the 30 Year Anniversary of 2010;

Jennifer Otter grew up in the small beach town of Santa Cruz, CA. From a young age, she carried a Fisher-Price record player around with her instead of a doll. By age 18, she had her first paid position in the music industry, as College Marketing Representative for Sony Music, touring with Pearl Jam, Rage Against the Machine and a little band called Nirvana. At 25, she went on to be the West Coast Marketing Director for Interscope Geffen A & M Records, creating branding and marketing campaigns for artists such as No Doubt, Sting, U2 and Eminem. In 2003, she left to start her own marketing company, working with a variety of culture industry tastemakers, including L.A.M.B., Facebook and Quannum Projects, while lecturing at San Francisco State University and writing her M.A. in Humanities on Morrissey fandom as religion. Currently, she is a Lecturer at the University of East London and finishing her PhD at Goldsmiths University of London in Cultural Studies.