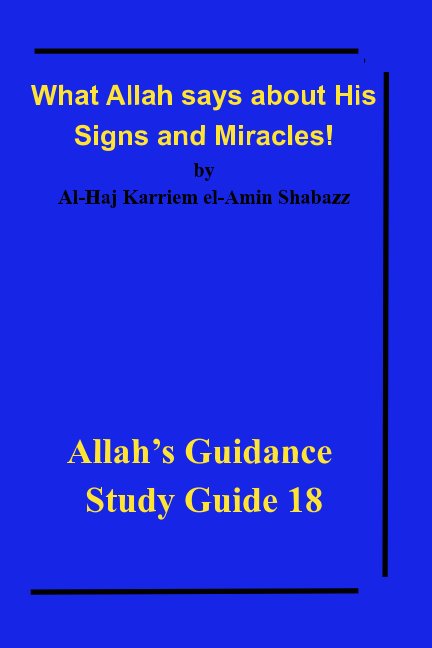 What Allah says about His Signs and Miracles!

This book may be found in online bookstores, like Amazon.com, using the ISBNs below:
Softcover ISBN:
9781715740917

The polytheists associate other deities with Allah because they do not pay heed to His signs, which serve as pointers to the right way. So, they go astray. They get lost in thorny bushes. Nevertheless, many of them do not entirely lose sight of the reality, and do not disbelieve in Allah, as their Creator and Sustainer. But, they get involved in polytheism. That is, they do not deny the existence of Allah, but they believe that there are other deities, who are also partners in His being, His attributes, His powers, and His rights. Had they considered these signs in the heavens and the earth from this point of view, they should never have been involved in polytheism. In that case they would have discovered everywhere, in each and every one of them, the proofs of the Oneness of Allah.

This is to arouse people from their apathy towards the signs of Allah that lie scattered all over the earth and the heavens. To urge them to search for the reality, by making right observations. Each and everything is not merely a thing, but also a sign, which points to the reality. A seeker after the reality, should look at these, with a look different from that of animals. This is because an animal sees a tree, a mountain and water and takes it as a mere tree, a mountain or water, and with the help of his senses makes use of these according to his needs. But Allah has endowed man with a mind, that is able to consider things in other than their physical, and material aspects. So that, he may think deeply, and search for the reality, by means of these signs of Allah.

Still struggling after all these years.